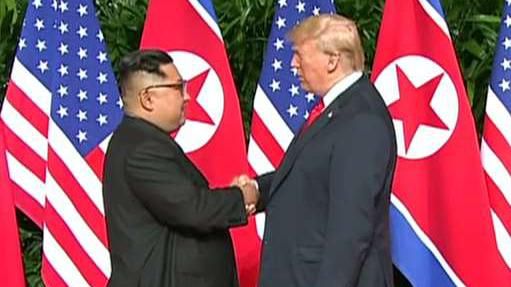 President Trump and North Korean leader Kim Jong Un on Tuesday emerged from their “working lunch” and indicated that they were about to sign something, but did not give any further details.

“We had a really fantastic meeting, a lot of progress, really very positive,” Trump said “I think better than anybody could have expected. Top of the line, really good. We’re going right now to a signing.”

Trump did not go into details about the comment.

Trump shook hands with North Korean leader Kim in Singapore shortly after 9 a.m. local time Tuesday, kicking off a historic summit meeting and marking a new era in relations between the U.S. and the totalitarian state known as the Hermit Kingdom.
Trump arrived first at the summit site on Singapore’s Sentosa Island. Kim’s black armored limousine pulled in a short time later at the luxury resort for the world’s first meeting between a sitting U.S. president and a North Korean leader.
The two clasped hands as they posed for photos in front of a row of U.S. and North Korean flags. Trump then directed Kim to walk down a hallway, where they briefly spoke.